One of the most remote overwater bungalow resorts in the world, the Coral Lodge is a tiny hotel that is ideal for romance as well as for diving and other water sports. The seclusion is part of the appeal, as there is no TV or internet available at all, so it's important to adjust expectations before booking here.

The gorgeous location in the San Blas Islands chain is another major part of the appeal. There is excellent cuisine available, and plenty of activities as well, but relaxing might be the thing to do at the Coral Lodge. If you are looking for a 5-star resort with overwater bungalows lined up over a clear-water lagoon you'll need to go to the South Pacific or the Maldives. However, those wanting something just as beautiful and more interesting, at a much lower price, should consider the Coral Lodge.

The Coral Lodge is located on one of the San Blas Islands, which are just east of Panama in the Caribbean Sea.

Overwater bungalows: 6
Beds: One kingsize
Wi-Fi: No
Entertainment system: None
Room service: No

The Coral Lodge Spa features a wide range of massage, relaxation, and therapeutic treatments and services.

WHAT THE REVIEWS SAY

The Coral Lodge gets mostly very good reviews, though some guests are disappointed in the fact that it’s not a slick 5-star resort as their travel agent might have led them to believe. Generally the resort is described as a secluded paradise, with the food in particular getting rave reviews.

Many guests come specifically for the diving and snorkeling, and most are very impressed, but some had rough seas during their stay so it’s important to time your holiday around the good season if you’ll be diving. Some reviews comment on insects, but most agree that they don’t really harm anything once you are used to them. 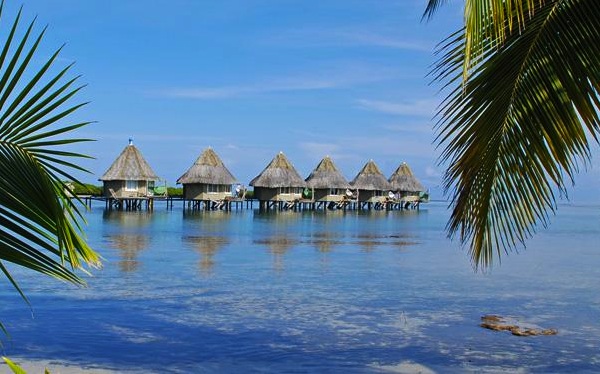